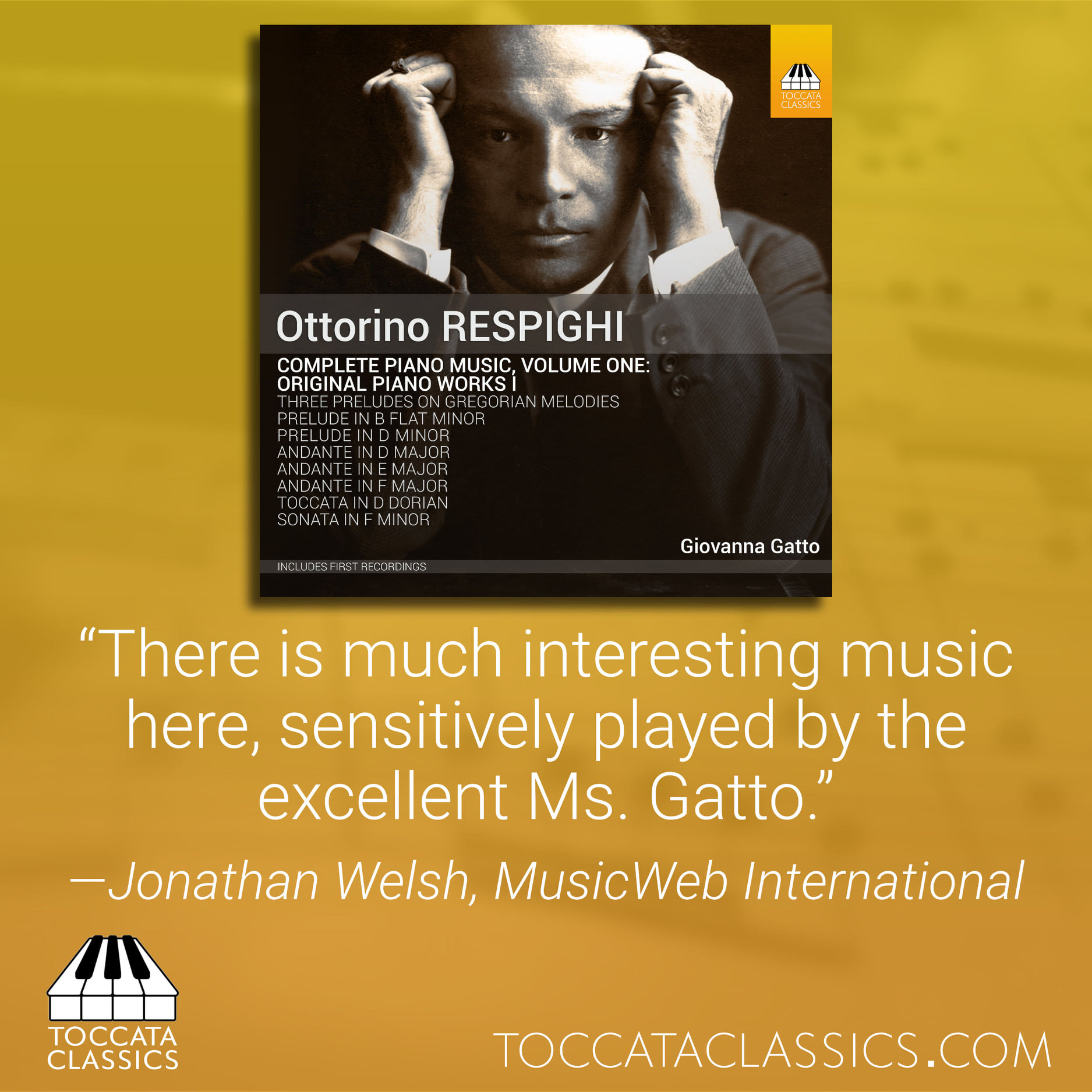 I must confess that Respighi is one of those composers I am not hugely familiar with, and I was even less aware that he wrote any piano music at all! Luckily, the ever reliable Toccata Classics and Giovanna Gatto have decided to begin a series of all of his piano works, so that everyone can learn more about his output.

The disc starts with a short Sonata in three movements, dating from the composer’s late teens. This is a stormy work, passionate and brooding but not really bearing any resemblance to the later orchestral works for which he is famous. However, there is some very clever and interesting music in the first movement, and some rather evocative and atmospheric music in the second. The finale is a strange piece, a mix of charming and quite violent music but here played in a way that it holds together perfectly logically. I rather like this little sonata, it is quirky and, in places, rather fun – and here it is excellently played.

The Preludio in B flat minor is more whimsical at the start but strays into darker areas as the piece progresses. It is an odd work, with plenty of harmonic interest and a strange, dislocated feeling to it. It certainly packs a lot of material into the running time of four and a half minutes. It starts slowly and mysteriously but the central section (with heavy reliance on a tune in the bass) provides an interesting contrast. Things build after this as the opening music (albeit modified) returns, gains in power and becomes more and more agitated and aggressive. Then all the tension is resolved and the piece slips quietly away into the ether.

Another Preludio, in D minor, starts slowly but quickly accelerates to Presto. The remainder of the piece is made up of alternating slow and fast music. The overall atmosphere is rather like a series of sad pictures punctuated with happier ones. There is some really joyful and rather amusing music in between the sadder interludes. I rather like this work because of the extreme contrasts between these episodes. All is perfectly played here, with a real sense of feeling in the melancholy sections. There also is no shortage of difficulty in the faster parts, and throughout the whole four minutes the piece holds together well.

The Toccata ‘Dorian’ is in a different mode altogether. There is an almost astringent quality to this work, just under three minutes long. It is not a rapid piece to begin with but, about a minute in, the pace gradually increases to something resembling what might be expected of a toccata. Again, there is plenty of harmonic interest here and some rather wonderful harmonies.

The following three pieces, all marked Andante, were written in 1896. The first is really rather charming and beautifully played, and seems to dove-tail into the second work (completed by the pianist) which is also rather whimsical but contains some interesting bell-like effects in the right hand while the left hand provides some harmonically interesting chordal accompaniment. Personally, I cannot hear the join between the music Respighi wrote and where Ms. Gatto continued; she has made an excellent job of the completion. Lastly, there is another Andante, a wonderful little creation which almost sounds Chopin-like at the beginning. The central section is more dark and agitated, with an interesting descending motif in the left hand which alters the mood to something creepier before this is dispelled by the return of the opening theme. I initially thought of these Andantes as my favourite tracks on this disc because there was so much packed into their short playing time. I changed my mind – see below – but even so the three works receive perfectly judged performances, with plenty of nuance and feeling where required.

The disc ends with another set of three pieces. Again there are Preludes but this time based on Gregorian melodies. These are much later works, dating from 1921, and more distinctive than the earlier works on the disc. The first piece is marked Molto lento but does not remain slow all the time. There is a really lovely, beautifully played effect, about three-and-a-half minutes in, with both pedals – similar to the technique used by Saint-Saëns in the slow movement of his 5th “Egyptian” Piano Concerto. There is also some very interesting counterpoint throughout this work, with themes winding around each other in a most interesting fashion.

The following piece is anything but Lento: a very aggressive and powerful Tempestoso full of tremelandos and some incredibly difficult-sounding playing, all coped with admirably here. This violent opening music slowly transmogrifies into something slightly less frantic, and generates a much friendlier section which starts about two minutes in. Despite this, the left hand here still sounds like it has plenty to do! The powerful music returns not long after, before again fading into the bass to be replaced with a more reflective episode with more of the Saint-Saëns-like effects. This dispels quite quickly, leading to a powerful, positive-sounding conclusion. On repeated listening, I think I like this piece the most on the disc. It contains a variety of music and technique that makes for a very interesting listen, all packed into only six minutes.

The final piece is again a Lento (Respighi seemed to like this tempo direction in his piano music) but different in style. The piano writing is much sparser and searching in tone, and there is a very insistent bell-like motif in the right hand which is bound to stick in your head. This is cleverly integrated into the music as the mood changes to something more genial and relaxed. As the piece draws to a close, the atmosphere changes again; as the bell motif is accompanied by something much more mysterious, leading to the end which quiet and sad in tone.

I cannot think of any other composer who writes for the piano in this way. Respighi’s style is odd in comparison to anyone else (except for the odd flashes of Chopin in the Andante in D). According to the excellent notes, Respighi probably did not have any formal piano training, which maybe explains this. The completion of the Andante in E (track 8) is tastefully done, and is perfectly in keeping with what the composer wrote. There is more explanation in the detailed notes as to how this was put together. The recorded sound is clear, bright and lifelike. There is much interesting music here, sensitively played by the excellent Ms. Gatto. Having listened to this, I think it is a shame this composer did not write more original music for the piano. I look forward to the transcriptions of his own works and other composers’ works. That, according to the notes, will be in volume 2.

Share:
© Giovanna Gatto 2021 - All Rights Reserved
We use cookies on our website to give you the most relevant experience by remembering your preferences and repeat visits. By clicking “Accept All”, you consent to the use of ALL the cookies. However, you may visit "Cookie Settings" to provide a controlled consent.
Cookie SettingsAccept All
Manage consent