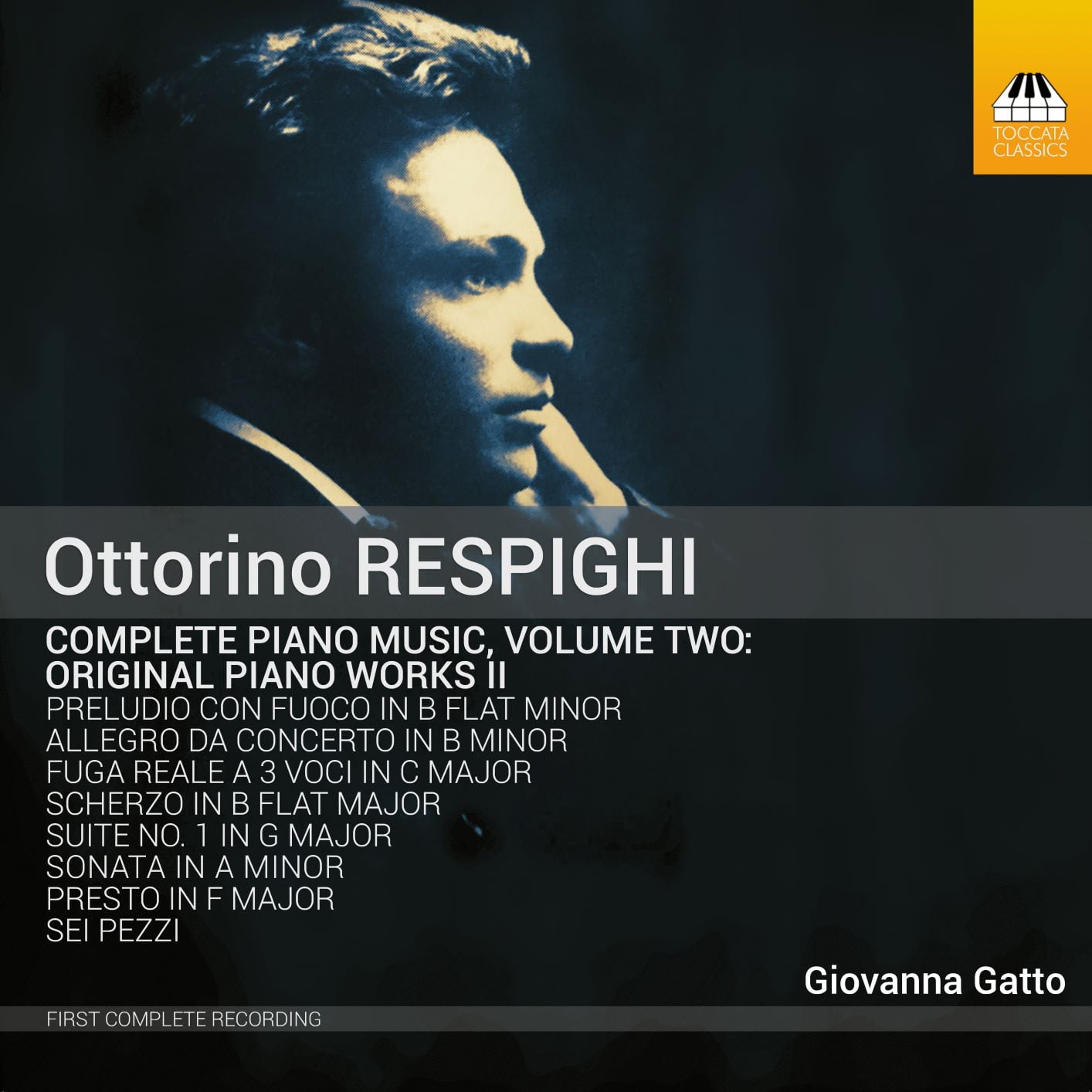 Respighi Complete Piano Music II includes a previously unknown sonata, only recently published, and a number of works from the composer’s youth, some of which find completion by pianist Gatto herself. The major contribution lies in the Piano Sonata in A Minor (1896), written in a traditional, Classical, three-movement structure under the guidance of Giuseppe Martucci (1856–1909). Martucci’s own passion for the past, particularly in German music, emphasized the sonata form as practiced by Brahms, and to this Respighi brought his own admiration for Schumann and Chopin. The first movement, Allegro moderato, makes a declamatory statement in both hands, in the dominant, and the melodic line descends from three octaves above. The long bridge passage takes us to C, where the tranquil melody, with its right-hand arpeggios, sounds like Schumann. In its animated impulses, we might think of Schumann’s Kreisleriana. Respighi likes to alter his expressive colors continually, so the major and minor modes of A play off each other. The rich chord structures tend to support the melody. A sense of musing infiltrates the large development section, leading to the recapitulation of the two themes, and a vigorous Presto episode provides the finale.

The second movement, Andantino, counters the aggression of movement 1 with a lullaby in F Major. Two themes present themselves and repeat. lending to variations and a reprise. Gatto in her note claims the melody has some obligation to No. 5 of Schumann’s op. 68 Album for the Young. The music wanders in and out of melodic phase, with the right hand’s suddenly bursting into an impassioned declaration, while the left hand provides a chromatic countermelody. The last movement, Allegro vivace, nods in several respects to the Brahms scherzo written for the so-called “F-A-E” Sonata. Passing riffs recall the Schumann Piano Concerto. Any number of nervous tremolos saturate this music, much like the first two, early piano sonatas of Brahms; but Respighi has his own ideas about a finale: he utilizes materials from the first movement to elaborate a fugato in a severe imitation of Bach. Chromatic chords take us to a definitive, dramatic coda.

Gatto then turns to an organ piece submitted as a test for a counterpoint and fugue class of 1898 held by Cesare Dall’Olio at the Liceo Musicale in Bologna, a Fuga reale in tre voce in C. Gatto obviously transcribes this work on the piano, using the middle pedal in the last measures of the stretti to elucidate the C-Major pedal point. This moment of teenage academia gives us some insight into the heavy Bach influence in Respighi’s development. The acrobatic Presto in F (1896), rather brief, contains some modal qualities worth a listen. Even more virtuosic, the Preludio con fuoco (1898) displays some Slavic color, reminiscent of Tchaikovsky, even Rachmaninoff. The melodic line competes with rapid, broken arpeggio figures in syncopations. Respighi’s Allegro da concerto (1896) easily recalls Schumann’s own op. 8. The swirling character of this passionate tempest also seems to borrow from Schumann’s Piano Sonata in G Minor, op. 22. Respighi’s calm, secondary theme in D is marked cantabile, and has the bass and treble voices in quick colloquy. After the Schumann torments, the last page settles into a soft lyric. The Scherzo in B♭ (1895–96) bears a Mendelssohn influence, “orchestrally” scored, with a Trio in the form of a chorale.

Respighi’s Suite in G (1898) in five movements plays as a caricature or light grotesquerie, the five (of six) surviving movements reminiscent of the composer’s music for Le astuzie di Colombina, a pantomime in two tableaux by Ileana Leonidov. The archaic air of courtly and 18th-century dances seems typical of Respighi, in light of his orchestral arrangements, say, in The Birds. The Sarabanda proves touching, somehow innocent of the sense of parody in the rest of the suite. The ensuing Allegro con brio returns to musical satire, pitting thirds and sixths in leaps over repeated eighths in the bass. The music then gallops to a full cadence, then theme 1 enters pp in low octaves, and a rapid ascending scale in 16ths crescendo ends the romp. The final Presto, a 6/8 toccata, includes some playful harmonic shifts, mainly focused on the minor sixth, G-E♭.

A publisher rather than the composer compiled Sei pezzi per pianoforte (1903–05), since these pieces do not form a unity. The most famous of these pieces, the Notturno: Lento, served the young Arturo Benedetti Michelangeli as a recital entry, with its soft triplets and liquid sonority in the manner of Liszt. The high tessitura of the melodic line vibrates with Puccini harmonies. Some clever effects permeate the opening selection, Valse caressante, in its imitation of Chopin and the coda’s sounding like a rarified music-box. Respighi’s archaic temper lends a staid charm to his Minuetto, fashioned in a manner similar to Ravel’s methods in old music. A more “academic” effect permeates “Studio: Presto,” with its alternating sixths and crossings of hands. No less a product of the “academy,” the second piece, Canone, reminds us of Busoni’s influence on Respighi, with passing colors from both Franck and Clementi. Respighi used items from his first opera, Re Enzo, for the final selection, “Intermezzo-Serenata,” rife with harp and violin arabesques drawn from the first and second tableaux of act III. Marked Andante calmo, the piece in fluid triplets casts a magical allure over the landscape of Respighi’s emergent style.

This article originally appeared in Issue 45:5 (May/June 2022) of Fanfare Magazine.

Share:
© Giovanna Gatto 2021 - All Rights Reserved
We use cookies on our website to give you the most relevant experience by remembering your preferences and repeat visits. By clicking “Accept All”, you consent to the use of ALL the cookies. However, you may visit "Cookie Settings" to provide a controlled consent.
Cookie SettingsAccept All
Manage consent